Last weekend, I had a really rejuvenating trip to Kyoto. And the funny thing is, I didn’t exactly do anything important. I mean, I went to a Mayday (Taiwanese rock group) concert in Osaka and it was amazing. More on that in a bit. And then I stayed with a friend in Kyoto and got to see a few other friends while I was there. Mostly what made my weekend great was just the relaxation I felt.

First, I will give a quick review of the Mayday concert. For those of you who don’t know who Mayday is, you should, and you will soon. They are starting their world tour in Japan, and they will move on to Canada, America, The UK, France, and Amsterdam. There might be a few more shows, but that’s about as much as I can remember. Ashin is the lead singer and he writes most of the lyrics to all of their songs. I know I just started learning Chinese last year, but I was moved by his kind words during the concert and in his lyrics I always find in me a deep, constructive, and more positive outlook on life. They  have songs that are upbeat and silly, some are brutal and dramatic, and others are soft and emotional. They have a great range of songs, but my recommendation is that you check out 恋愛ing and 乾杯 (cheers) to start out with. They will blow your mind. Here’s a pretty picture for reference: 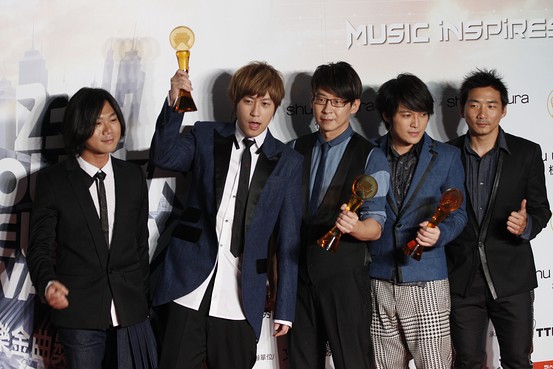 Moving on, since I took a trip up to Osaka to see Mayday, I had to find a place to stay, and since I have a lot of friends in Kyoto, I was kindly put up by an amazing lady, who goes by nihonchique on twitter and youtube, who also loves NEWS and Johnny’s as I do. She is planning on coming to my place for the Tegomass concert in April, so it worked out nicely.

She and I had a fun time fangirling over our boys, and then on Sunday we went downtown and went to Junkudo, a nicely sized bookstore. Now, I do have bookstores where I live, but most of them are not in my city, and I rarely make trips into town where of the good stores are. We have a Junkudo and Book Off, which are my two favorites, but they are a good ways away from my house, so I never want to spend the money getting there. Also, our Tsutaya (a book store and rental chain in Japan) only does movie and CD rentals, so I checked out the one by my friend’s apartment.

In visiting all three of these bookstores, I came away with a good stack of books and manga and magazines. I knew I would be going book shopping, but I didn’t expect to find such amazing things to read, or in such a large quantity.

Here are a few pictures of my haul! I am also adding in a few that I bought before going to Kyoto, but still recently.

Pink and Grey manga volume 1 (ピンクとグレー) by Shigeaki Kato (加藤シゲアキ)
Shige is a member of NEWS, my favorite group of all time. He has written three books, one to come out this year. This is the manga version of his first book. I own both of his books that have been released so far, but since they are in Japanese, I started reading them and stopped because at the time my kanji level/comprehension level/patience was just not there so I put them down. Hopefully I can get through the manga version a lot faster!

Kanojo wa Uso wo Aishisugiteru volume 1 (カノジョは嘘を愛しすぎてる) by Kotomi Aoki (青木琴美）
So this has been turned into a movie. I also bought the first volume of the manga, again for a faster read. The art style is really interesting, and usually not my style, but I’m going to give it a shot and see the movie soon.

Aoharaido volumes 8 and 9 (アオハライド）by Io Sakisaka (咲坂伊緒)
So this manga is a series by my favorite mangaka. My favorite work of hers is Strobe Edge, which is finished, and this is her next series. It’s good but not as good as Strobe Edge, and since I was able to read SE (for the most part) in order and in a short amount of time, I understood it a lot better. It has taken me a lot longer to read this series because I’ve moved around a lot while reading it, and the volumes come out really slowly, so I have been keeping away from it until it finishes. But it’s being turned into an anime this year, which I’m really excited about. I mainly bought it for the cover because it has an ad for the anime.

Shitsuren Chocolatier volume 1 (失恋ショコラティエ）by Setona Mizushiro (水城せとな）This was also just made into a drama with one of my favorite actors, Matsumoto Jun. He’s in Arashi, who I saw a few weeks back. It’s so cool seeing someone on TV when you’ve seen them in person. This story is just so different and unique. I love it so far.

Chiguhagu na Buhin （ちぐはぐな部品）by Hoshi Shinichi （星新一）
So I found out about this book a few years back when I lived in Kyoto. It interested me because it was a book of short stories, and at the time I didn’t have the time or energy to dedicate myself to full novels in Japanese, and even though I think my language ability was probably better than it is now, I didn’t have the confidence to try to read too many novels. But I never could find it in a bookstore. Thankfully, we asked a shopkeeper to look it up for us and he told us to go downstairs, and when I did, it was there on a little rack waiting for me. Oh, Japan.

Install (インストール）by Wataya Risa (綿矢りさ）
I heard about this book recently and a lot of foreigners have read it saying it was fairly enjoyable and easy to understand even for them, so when I found it at Book Off for 105 yen, I picked it up.

Hareta Hi wa Toshokan e Ikou (晴れた日は図書館へ行こう）by Midorikawa Seiji（緑川聖司）
I picked this book up because the cover and premise were interesting. It’s actually been my favorite to read so far because it’s cute and all about the library, and it’s a mystery. Good for someone like me who doesn’t like a lot of complicated descriptions or kanji, but still wants a good sized novel.

Hakoniwa Toshokan (箱庭図書館）by Otsuichi （乙一）
Again, this book had “library” in the title, and it’s by Otsuichi, one of my favorite Japanese writers. He does mystery and horror really well. I’ve read some not so great reviews about this book on Amazon.jp, but I picked it up before reading them. It’s fairly long, and I want to read something shorter that he’s written before attempting this. Apparently he collaborated on it, so it’s not his best work. Whatever. Otsuichi is still a great storyteller.

Shotenin no Koi (書店員の恋い) by Umeda Mika (梅田みか)
This, again, struck me because of the title and cover. I haven’t taken much of a look at it since I bought it, but I’m excited to find cute novels like this. I want to expand my knowledge of Japanese literature, since my range is quite limited, so if I see something interesting, I tend to grab it!

Komatta katakana Eigo (こまったカタカナ英語) by Catharine Craft (キャサリンクラフト)
This book is cute and really interesting. It’s all about phrases that are “English” in Japanese that don’t actually make sense to English speakers. I bought it to use in my English classes. I think my students will get a kick out of it, and will actually learn things when they already know the words. Apparently, it was written by a foreigner and then translated. Kind of cool.

7 Habits of Highly Effective People – manga version (まんがでわかる７つの習慣) by Steven Covey
I saw this and just had to have it. I’ve never read the book in English, but this is the manga version of the Japanese translation, so it’s cute and has pictures. Just a great book to have as a hoarder.
One more book I can add to this haul, although I bought it a while back, is 1+1=NAMIDA by Zopp. Zopp is a famous lyricist who writes a lot of amazing songs, many of them sung by my favorite Johnny’s. I posted a picture on twitter of me buying the book, and Zopp tweeted me, thanking me for buying it. When I replied, telling him that I’m American and it will aid in my Japanese study, he said he was honored!! And other foreigners have tweeted him in English, and he replies in perfect English. He’s just such a cool guy.

I also recently found out about the Book Outlet, and I bought 4 books from there as well, all in English, though. I will do a post on those when they come in. Let me know what you are reading or watching this year! I think I need to cool it on buying new books/series for a while. I also have a lot on my Kindle app, so I have plenty to do for the rest of the winter.

I think I’m going to start doing more fangirl/book posts to liven things up! I am starting to go to school with a brighter attitude and a better handle on things, so I hopefully won’t have as much stressing me out this year. Fingers crossed, chin held high!

One thought to “Book Haul.”