This week is my first week back at my main school. It’s a middle school, and I have less classes filling up my time than at the elementary schools. I am also a more permanent member of the staff here, so I feel better being here than anywhere else. No one asks me the same dull questions, like whether or not it’s cold in America as well.

I also don’t do any of the lesson planning, which is something I am working to change. But we are at the end of the school year here in Japan, so we will get new teachers and students in April. So I will try my best these last few months and then I hope to make a lot bigger of an impact next school year.

So this weekend was really fun because I got to clean my house and watch tv and read. I also made myself get out of the house to go to a JET party. That was really awesome, and we even did karaoke after eating in a school-themed izakaya (which is technically a bar but in Japan they are more like sit down restaurants than somewhere you go to play pool and smoke).

On Sunday, I made plans with my friend and we met up in the station to eat lunch. We met up at around 2pm, so we were starving. We ate a real meal before shopping at the bookstore. (Yes, more book shopping. For some reason, a friend of mine was surprised that I went shopping for books AGAIN, since I had a haul last weekend. *shrugs*) I bought a new manga series that I started reading a few days ago. I got an insert in another volume of manga I bought and it was really good. I will attach pictures and do a short description next time I do a book haul post, which should be soon. I am supposed to be getting novels in English in the mail soon. I also got volumes 2 and 3 of 失恋のショコラティエ. The second episode came on last night and it was amazing. And also very awkward to watch, since there were a bunch of kissing scenes and my students watch that show as well. I feel like a parent already. I want to shield their innocent eyes.

So after the bookstore, we went out for pancakes! There is a cafe in Hakata Station called Campbell Early and it is so good. I had chocolate pancakes with strawberries and milk tea. They also put custard in the middle of the pancakes, and I am crazy about custard. After deciding never to eat again, we went to my friend’s house to ‘edit’ and ‘write’. Yeah. Like any of that happened.

She did help me edit my first two chapters, and gave me a lot of good criticism. Out of all my chapters, my first two are by far the worst, because I wrote them so long ago. My writing style has changed and although it’s hard to read how bad I used to be, it is also somehow nice to see how far I’ve come.

So I went to bed early and woke up early on Monday because I was just so excited to see my students. I only had three classes, and they were all with a JTE who I have had problems with in the past. But she was in a better mood than she usually is, and even when we still had discipline problems, we both enjoyed the classes. I am just so happy I am getting a fresh start. I still want to do more in class, but yesterday I was able to do something amazing.

So usually I just walk around and help students with spelling or pronunciation if they ask for it. But yesterday, one of the class clowns asked me a serious question. We were teaching them ‘can’ and the conversation went something like this:

He asked if B was answering ‘No, I can’t move’ and I had to explain that, since there was an adverb, easily, she was telling A that she could move, but not easily. I really wanted to be able to explain it to the entire class, because I feel like he made a good point by asking me that question. But after I sat with him for a minute and explained it, he had that lightbulb moment. He said, ‘AHH!! I get it now!!!’ and I just grinned from ear to ear.

I was a) happy to finally do something more than be a tape recorder and b) relieved that I know how to explain grammar points to students. However, since I’m the ALT, I am not really supposed to speak Japanese. But when I was explaining it to him, I used both English and Japanese, because otherwise he would have been more confused. I really want to find a way to team teach with that JTE better so that, instead of translating everything I say, she can just HELP to explain things. It’s a strange environment, and a delicate balance that I haven’t quite figured out yet.

I am going to try to be a better teacher this year. I am also in the process of applying to graduate school. And I am reading more books to improve my Japanese and to lessen the time I waste on the internet. And I am editing my novel. My friend told me she was amazed at how many things I do at once, but I am not the type of person who can sit down and do one thing for too long. Not that many of us are, now that we have smartphones in our hands while we watch tv and read and do facebook at the same time. But I’m working on it.

For all of you who have work or school, and are trying to be better this year, tell me something you have committed to doing, or something you want to try this year! I want to do Kyudo, Japanese archery, and get involved with the drama club at my middle school. I also want to travel in my prefecture more.

Tonight I am going to the station to pick up my preordered copy of テゴマスの青春 (Tegomasu no Seishun). It is their 4th album as a duo and I am so excited. They are having a tour, and I am hopefully seeing them in April. 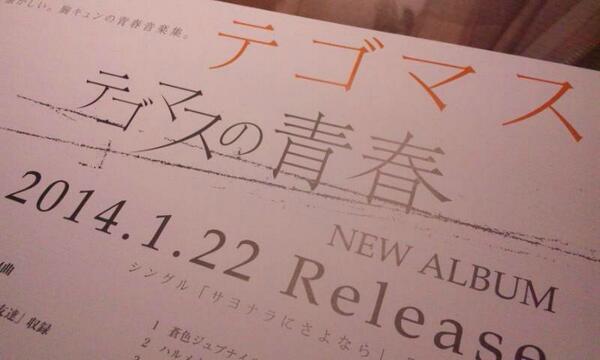 It’s nice to have things to look forward to at night. But I am actually looking forward to things at school, as well.