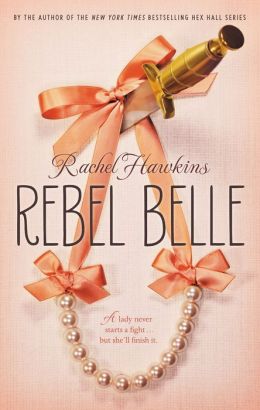 Harper Price, peerless Southern belle, was born ready for a Homecoming tiara. But after a strange run-in at the dance imbues her with incredible abilities, Harper’s destiny takes a turn for the seriously weird. She becomes a Paladin, one of an ancient line of guardians with agility, super strength and lethal fighting instincts.

Just when life can’t get any more disastrously crazy, Harper finds out who she’s charged to protect: David Stark, school reporter, subject of a mysterious prophecy and possibly Harper’s least favorite person. But things get complicated when Harper starts falling for him—and discovers that David’s own fate could very well be to destroy Earth.

Phew! It took me a while to get through this book. I first heard about it from a few booktubers I like who all raved about it. It sounded like a fun read – Southern girl turned assassin with some high school romance. I was sorely disappointed with what I got. About 30 pages in, I could tell this book was not what I had expected. Let’s break it down:

The Plot – At first I thought this was more of a stand-alone book but I should have checked before I started because as it turns out, it’s the first in a series. That usually means this is the beginning where everything is explained, the characters transform from their former selves into their new selves and there are only a few major plot points. In a good series, every installment will feel like a complete package, but I felt this was somewhat lacking. The plot was mildly interesting but I think it was too bland for my tastes and I didn’t feel a real sense of adventure.

The Characters –  The main character, Harper, starts out as a self-obsessed drama queen who is popular and a perfectionist. I couldn’t relate to her until about halfway in, which isn’t necessarily a bad thing and I did see her transformation as one of the better things about this book. However, her relationships with everyone else in the book came across as robotic and even though she would claim someone as her favorite person, I couldn’t really feel it like I wanted to. The other characters were decent but not very well-rounded, and I found myself rolling my eyes often during “touching” moments.

The Writing – Not the worst I’ve seen, but enough to make me want to put the book down every few paragraphs. The narrative is first-person, and Harper’s use of language often annoyed me. I tend to hate when authors write YA in a tone they think people can relate to, using “Oh my God!” or “Ugh ugh ugh” (real sentence in this book) as dialogue. I honestly think that after reading this, I should stay away from YA for a while because childish dialogue and fake “angst” scenes and forced “romantic” scenes appear way too often. Unless a writer treats his or her audience as peers rather than someone they need to talk down to or appeal to with modern slang, I don’t want to read that person’s work.

Overall, I can see why people like this book. The action wasn’t so bad, the beginning setup was pretty intriguing, and some of the scenes reminded me of my own high school days. However, I am no longer a high schooler and I am seriously over reading “Ugh I totally don’t like him – no way!” because I think it’s a cheap way to add conflict. I also heard that the second book was not as good as this one (seriously?) so I don’t think I’ll be continuing with the series. This adult has better things to read.