Whenever I’m knitting and I make a small (and sometimes big) mistake, I try to fix it if it won’t take up too much time or energy. If it will, though, and the mistake isn’t going to bother me too much, I’ll let it go. Why? Because most people can’t tell. Unless you know the pattern I’m using, or you know how to knit really well, you probably won’t be able to find my mistakes, and even then, I put in a lot of effort into my project, so sometimes mistakes give it a little character. 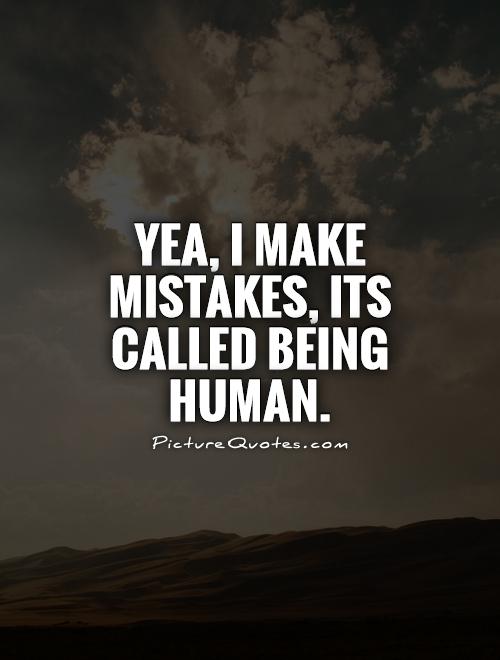 I worked on lights and sound for a play a few weekends ago, and the same concept applies there, too. Even if I made a slight mistake in light changes or if I turn on a sound effect a little late, most people in the audience will never know the difference. Just like if you forget a line and you cover it up, mistakes aren’t always obvious to others.

However, this kind of got me thinking. Yes, it’s great to remind yourself not to beat yourself up for mistakes, but the problem with making mistakes is that you will know that you made them. If you don’t remind yourself that in the grand scheme of things, your mistakes won’t cause huge consequences (unless you commit a crime or something, but let’s not go there…) then you might end up constantly fixating on those mistakes.

Even though no one else knew anything was wrong, personally, you will remember, and if you aren’t careful, it will eat you up. It’s best to learn to let go and move on. Mistakes make us stronger. Every time I made a light change error or messed up when turning on the sound effects during the play, it reminded me to be conscious not to do it next time, and then by the last performance, I was running the tech practically error-free.

I didn’t put too much pressure on myself during the weekend of the play because I had only practiced for a few hours before paying customers came in to watch. I gave myself a break and learned from my mistakes. The same goes for my knitting. I’m currently working on a cowl that I made a lot of mistakes on in the beginning because the pattern confused me. However, I worked through every single problem and now I don’t make them anymore. Although the beginning of my work looks a little strange, most people won’t be able to tell once I’m done, and there will only be a few rows of mistakes, and the rest will be something I can be proud of.

My fiancé loves to play piano, saxophone, guitar, and many other instruments, but he is nervous about singing or acting in front of other people. When I asked why, he said that he’s scared of making mistakes, but when he’s reading sheet music and playing an instrument, it feels less intimidating because he’s hidden behind a music stand. I’m trying to convince him to practice getting over his stage fright so that in the future we can do plays together, so I used the examples I just gave as to why mistakes are more noticeable to the one making them. I think I still have a long way to go, though, so wish me luck!

2 thoughts to “The Audience Can’t Tell”