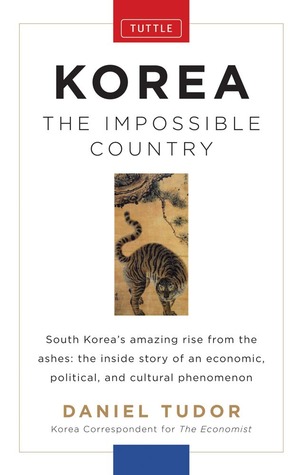 Long overshadowed by Japan and China, South Korea is a small country that happens to be one of the great national success stories of the postwar period. From a failed state with no democratic tradition, ruined and partitioned by war, and sapped by a half-century of colonial rule, South Korea transformed itself in just fifty years into an economic powerhouse and a democracy that serves as a model for other countries. With no natural resources and a tradition of authoritarian rule, Korea managed to accomplish a second Asian miracle.

Daniel Tudor is a journalist who has lived in and written about Korea for almost a decade. In Korea: The Impossible Country, Tudor examines Korea’s cultural foundations; the Korean character; the public sphere in politics, business, and the workplace as well as the family, dating, and marriage. In doing so, he touches on topics as diverse as shamanism, clan-ism, the dilemma posed by North Korea, the myths about doing business in Korea, the Koreans’ renowned hard-partying ethos, and why the infatuation with learning English is now causing huge social problems.

After reading The Birth of Korean Cool, a book I highly enjoyed for it’s in-depth look on Kpop and how the Hallyu wave got started, I decided to read this book as well, which has less of a personal touch but still seemed informative. I love visiting South Korea, but the history and the politics of the country were a mystery to me, so I knew it would be good to inform myself with another nonfiction.

The bulk of this book does a great job at going in detail explaining things like the history of South Korea, Confucianism and it’s grasp over the country’s culture, and religion in relation to the people of South Korea. However, parts of it get redundant and information that has already been covered pop up again over and over using basically the same language. I’m sure the author wanted to make sure people who skipped around to different chapters understood things, but to someone who read the book in its entirety and in order, I got annoyed at the constant re-explaining.

I also got confused when there were large chunks of political or historical talk, as a lot of it didn’t go in order and many things were skipped or left out. I would have enjoyed some visual tools like graphs or timelines because the author seemed to ramble on, going back and forth between times and events. Nonetheless, learning about these things was helpful and the author did a good job of keeping his personal bias out of most of the information. For example, he remarked on the state of Korean journalism, which features corruption and censorship, and I’ve heard my fiancé, who is Korean, exclaim that the media in Korea is mostly skewed in favor of those in power.

However, I was highly disappointed with the later chapters, in which the author blatantly shows his bias against Kpop and most current Korean music and entertainment. He wrote Kpop off as stupid, terrible, and aimed at teenagers, and as an adult who enjoys Kpop and sees how much variety it has and how many people over the age of 20 truly love it, it left a bad taste in my mouth. Kpop has helped propel South Korea into a popular tourist destination, especially for Japanese fans, which is important considering how much the Korean and Japanese governments despise one another. I personally think that Kpop and the Hallyu Wave are some of the best ways Korea and Japan can bring the younger generation together, and this gives me hope for a brighter future. The author then went on to lament how many great underground bands there are in Korea, which is true, but the entire chapter on music came off as a plug for obscure bands and a bashing on fans of Kpop.

Overall, the book is informative and opened my eyes to things about Korea I might never have known, so I would definitely recommend it to all those with an interest in Korean culture or those living in South Korea. However, you might have to skip over many redundant parts and parts where you don’t agree with the author’s attempts to write off new Korean culture as bland. Korea truly rose up in a short time, and it’s history is fascinating.