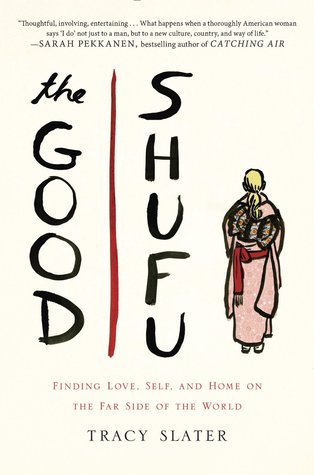 This is a memoir of an American woman who takes a job assignment teaching ESL to Asian executives and ends up falling quickly in love with a Japanese man. Their love for one another grows slowly but steadily, despite language and cultural misunderstandings. Often, Tracy, the author, questions whether their relationship will even survive, how she could possibly give up her nearly perfect life in Boston, and if living in Japan is a reality she is willing to face.

I’d heard about this book a while back as it floated around in the expat community, and I’d reviewed other memoirs and tellings of women in Asia and the relationships they formed, such as How Does One Dress to Buy Dragonfruit, Marriage in Translation, and Kissing Outside the Lines. Many of the women in these books either purposefully moved to Asia or fell unknowingly in love with an Asian man. As a woman now living in Korea, a week or so before my traditional Korean wedding takes place, I related to so many of those stories and felt less alone because of them.

As an expat who willingly moved to Japan and then South Korea, mostly for work but more recently for love, I expected this memoir to reflect my personal journey. I was a teenager when I discovered Asia and decided to study abroad there, and so much of my life has been centered around getting to know the culture, food, language, and people.

So I was quite taken aback to discover that this book opens as Tracy Slater, a proud Bostonian, has decided that she has the perfect life in her East Coast residence, and she doubts she will ever want to leave. She teaches writing at universities and to men in prison and is fiercely independent. Then her boss asks her to consider a job stint teaching ESL in Japan, South Korea, and China to a group of business executives.

Figuring it would be easy to adapt without knowing much of the culture or language, she reads a few guide books and takes the job. She is sorely disappointed to realize that she has no credibility with her students, as a woman, much less one who has no experience teaching English to non-native speakers. She wishes she could go home, but eyes a handsome young student in her class, a Japanese man named Toru. They quickly fall in love and she finds herself faced with the task of living in Japan or traveling back and forth from Boston.

To be honest, I wasn’t impressed by the beginning of the book, where Tracy attempts to explain Japanese culture how she first saw it. As someone who lived in Japan multiple times for a total of about 3+ years, I found the explanations tough to wade through. However, throughout the book, Tracy stays true to how she felt while going through the phases of culture shock, and I loved seeing her progression of Japanese language ability and ability to empathize with those around her.

Her relationship with Toru, a man almost impervious to stress, seems to be just the thing Tracy needed to help her grow. I was surprised that she didn’t write about a lot of fights in this book, either because she wanted to keep them out or because the couple rarely fought, I have no idea. I do get that Toru is a very calm individual, so it is possible they didn’t argue, but international relationships are difficult sometimes, and it was amazing to read how the two of them got through things together.

I ended up liking this book more than I thought I would when I first started it. The story of Tracy and Toru building a life together was heart-warming, and the pacing and overall structure of the book are very well done. I’d recommend The Good Shufu to anyone in an international relationship or anyone who’s lived abroad, especially in Asia.